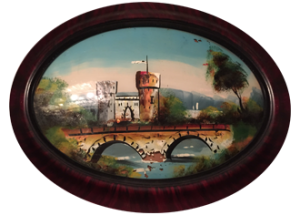 Inspiration can come from anywhere.

When I was a kid, I was inspired by a cheesy image of a castle painted on a rounded piece of glass. That painting was a fixture in my grandparent’s farmhouse since well before I was born. It hung high on the wall and, while I couldn’t reach it, I found I could stare at it for hours on end.

I thought it was nothing short of magical.

I haven’t painted many castles but, over the years, every brand I’ve worked with has felt a bit like an empty piece of glass — with its own unique colors, story and imagery – just waiting to come out. It’s a privilege to get to craft together the colors, language and visuals that accurately portray a brand. To help develop and maintain a brand voice that lasts for years to come.

In some ways, brands are the ultimate creation – a set of perceptions and images that represent a company. In other ways, they’re like paintings on glass – fragile, transparent and totally shattered in a single clumsy step.

From 2000 to 2007, BP (Beyond Petroleum) had increased brand awareness by 63% with a strong campaign establishing itself as environmentally responsible. When one of its rigs exploded in the Gulf of Mexico in 2010, killing 11 people, destroying fishing and tourism and damaging untold wildlife, its reputation as an “environmentally sound company” blew up along with it.

After years of being one of the hottest retail brands in the world, Abercrombie & Fitch was named “most hated brand in America” by the American Customer Satisfaction Index in 2013. The company released racist T-shirts and discriminated against non-white and “unattractive” job candidates. Its internal policies struck a nerve among consumers when CEO Mike Jeffries was found to have said, “We hire good-looking people. . .because good-looking people attract other good-looking people. . .” It wasn’t long before their bottom line started looking pretty ugly.

United Airlines’ recent mistreatment of a passenger has taken “brand shattering” to a whole new level. Since they beat, bloodied and drug a 70-year-old unarmed doctor off their plane, their rates have plummeted in a desperate attempt to attract the passengers that have left them in droves. Never again will they be able to ask consumers to “Fly the friendly skies.”

My grandparents have long passed away and their farmhouse has been emptied. My treasured glass castle now hangs in my home, an enchanting relic of a childhood passed – and a daily reminder of the fragility of everything we create.